Slime Rush TD 2 gives you the chance to battle slime monsters and defend the realm from their assault. Your kingdom's only means of security are its defensive towers. Thankfully, these new defense towers are stronger than ever before! To safeguard the entire kingdom, you just upgrade your defense towers, destroying enemy slimes before they reach the castle to prevent an invasion. If everyone is ready, let's begin the game!

The creatures have come to life and are preparing a massive assault on you. Assist your king and his subjects by devising brilliant strategies to vanquish your adversary. This game's purpose is to construct as many towers as possible from wooden blocks while preventing slimes from reaching your castle. The king and people require your intelligence and courage once more to stop them at whatever cost. With the addition of new armed towers, we are now impregnable!

Touch or Mouse for Play 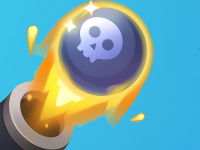